Prior to Governor Inslee’s election, I was asked by a member of his executive committee to send evidence I had of corruption and serious felony crimes and was given an email address to send my documents and other evidence. I did so, and those who have read my submissions here should be able to see enough to warrant a full investigation of Clark College, Clark College Board of Trustee, Washington Education Association Executive and certain field agents, Clark College AHE, Clark County Sheriff, Vancouver Police, Washington Court of Appeals Division II, Washington Employment Security Department, Vancouver FBI Special Agents Montoya and Rollins as well as Special Agents in Portland FBI, Washington State Auditor, Washington Human Rights Association, Miller Nash Law Firm, as well as named individuals.

This whole county is riddled with corruption that needs to be exposed layer by layer like peeling away the layers of a huge rotten onion.

Further, at a fundraiser for the Democratic Party I spoke briefly to Governor Inslee spoke of serious and serial corruption and felony crimes in Clark County as well as at Clark College, and he said to send him what evidence I had and did.:

This is all I ever got back:

Did you read Rick’s email earlier this week?

Rick is a great friend of mine, and I’m so grateful to have his support — and yours. Republicans are aligning their support around our opponent, and the Republican Governors Association has our campaign in its sights for defeat. Rick asked, and now I’m asking:

Will you contribute $25 right now before our end-of-October deadline?

With so much at stake, falling short of our October fundraising goals is not an option. I can’t do this without you. Thank you so much for your support.

Why was I offered $100,000 1) quietly retire; 2) never to disclose the existence of an agreement or its terms; 3) mutual non-disparagement; 4) never to file any civil or criminal complaint against any Clark College employee or agent for anything ever (and thus also to repudiate existing criminal complaints not acted upon);

The offer was given the last day before a scheduled termination hearing (hearing examiner picked by Clark College, committee composition by Clark College) at which the president of Clark College, Bob Knight who was under subpoena had to either expose and repudiate previous perjury in an Employment Security Department Appeal by Clark College that found against me due to his perjury, or he would have had to commit perjury again, as he did, this time opposed by two union officers, who sworn testimonies again exposed Bob Knight as a perjurer with a lot to lose. He and his cohorts have been protected by criminal conduct on the part of the FBI, Clark County Sheriff”s Office, Vancouver Police, Governor Inslee, Mayor Tim Leavitt, Clark County Prosecutor, Washington Human Rights, Washington AG, and more who have all been sent primary evidence of felony crimes by Bob Knight, and others and per 18 USC 4 Misprision of a Felony and Chatper 73 Obstruction of Justice and other statutes, are complicit before and after the fact in suborning perjury, conspiracy to suborn perjury, and a long list of other felonies both federal and state.

I have been busy with many things but we are setting up a whole site to collect and cross reference documents from people who have suffered corruption in Clark County or by certain agencies, law firms, persons, groups, we will drag out into the sunlight and bring mass action against them in lawsuits and formal filings against police and others involved. We are the militia. Act like it. Take these scum out of office with the very laws they have contempt for. They are nothing I promise you.

AG Motion Against Termination or Postponement WEA Notice of Com

Memo in Opposition to Motion in Limine

Emergency Request for Clark College Time Extension and other is 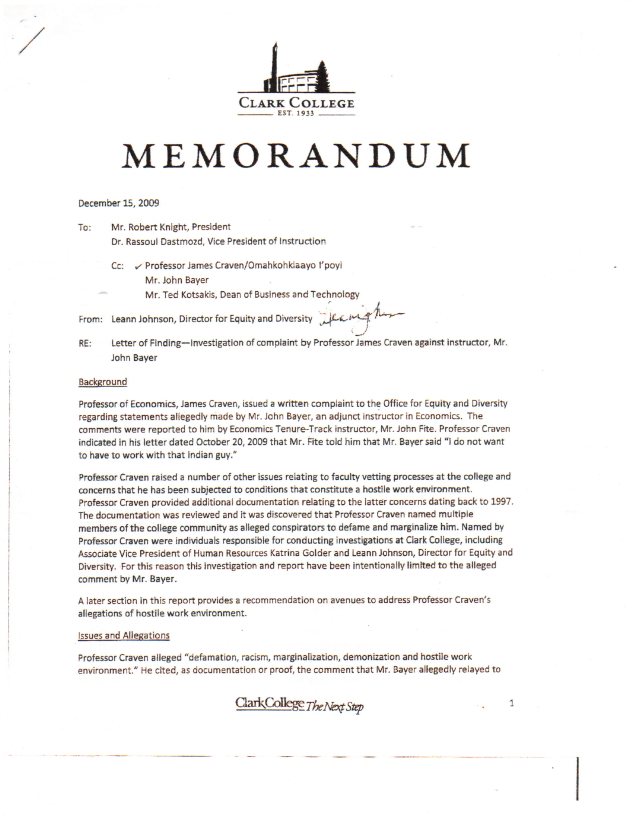 About jimcraven10 1. Citizenship: Blackfoot, U.S. and Canadian; 2. Position: tenured Professor of Economics and Geography; Dept. Head, Economics; 3. Teaching, Consulting and Research experience: approx 40 + years all levels high school to post-doctoral U.S. Canada, Europe, China, India, Puerto Rico and parts of E. Asia; 4. Work past and present: U.S. Army 1963-66; Member: Veterans for Peace; former VVAW; Veterans for 9-11 Truth; Scholars for 9-11 Truth; Pilots for 9-11 Truth; World Association for Political Economy; Editorial Board International Critical Thought; 4.. U.S. Commercial-Instrument Pilot ; FAA Licensed Ground Instructor (Basic, Advanced, Instrument and Simulators); 5. Research Areas and Publications: International law (on genocide, rights of nations, war and war crimes); Imperialism (nature, history, logic, trajectories, mechanisms and effects); Economic Geography (time and space modeling in political economy; globalization--logic and effects; Political Economy and Geography of Imperialism); Indigenous versus non-Indigenous Law; Political Economy of Socialism and Socialist Construction; 6. Member, Editorial Board, "International Critical Thought" published by the Chinese Academy of Social Sciences; International Advisory Board and Columnist 4th Media Group, http://www.4thMedia.org (Beijing); 7. Other Websites publications at http://www.aradicalblackfoot.blogspot.com; wwwthesixthestate.blogspot.com;https://jimcraven10.wordpress.com; 8.Biography available in: Marquis Who’s Who: in the World (16th-18th; 20th; 22nd -31st (2014) Editions); Who’s Who in America (51st-61st;63rd-68th(2014) Editions); Who’s Who in the West (24th- 27th Editions);Who’s Who in Science and Engineering (3rd to 6th, 8th, 11th (2011-2012) Editions); Who’s Who in Finance and Industry (29th to 37th Editions); Who’s Who in American Education (6th Edition). ------------------- There are times when you have to obey a call which is the highest of all, i.e. the voice of conscience even though such obedience may cost many a bitter tear, and even more, separation from friends, from family, from the state, to which you may belong, from all that you have held as dear as life itself. For this obedience is the law of our being. ~ Mahatma Gandhi
View all posts by jimcraven10 →
This entry was posted in Behind the Masks of the Democratic Party, Conspiracy against Rights and under Color of Law, Corruption and Intrigue in Government, CORRUPTION IN "HIGHER" EDUCATION, CorruptWA, courage and treachery in government, Faces of Fascism, Fascism in America, FBI-DOJ CORRUPTION, FOUNDATIONS OF FASCISM IN AMERICA, Government Corruption, Legal System Corruption, Psychopathic Management, Psychopaths and Sociopaths in Politics, Psychopaths in Management, Psyops, U.S. Terrorism, Vantucky Corruption and Inbredness. Bookmark the permalink.